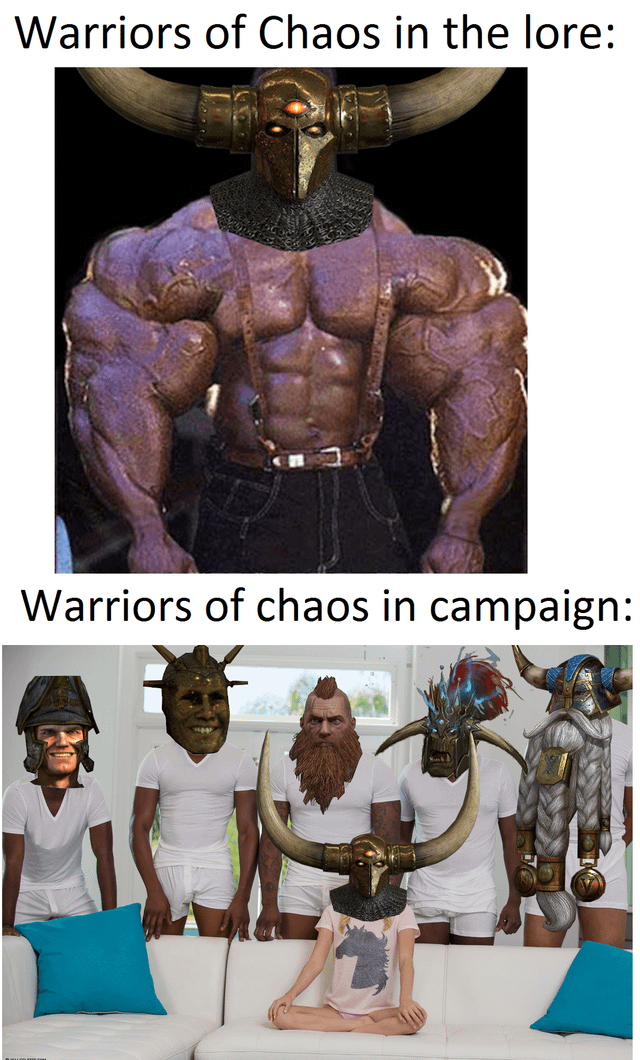 “Nah I think I’ll secede instead.”

Now that I look at it I shouldve flipped bottom archaons horns upside down. He still looks too assertive

You should have swapped his with Azhag’s.

More accurate if Grimgor was looming over the top one.

Grimgor only goes for worthy fights tho! Damn chaos is sad atm….

Grimgor has been so fucking strong this patch, its not even funny. Strength rank 1 from turn 10 onwards in my last 3 campaigns.

Nah, Grimgor comes out of nowhere, kicks him in the balls, and then goes back to doing what he does best.

I was playing as Last Defenders in my latest campaign and never saw them once. They got destroyed so quickly

They seldom make it past halfway into the Empire

Oh look the event is over

I don’t know if it’s just me but this has been vastly improved since the last patch.

The difference is that the Vampire Counts and Greenskins fare extremely well before Chaos shows up. In my latest campaign Sylvania and Von Carstein teamed up to take over half the empire. Grimgor controls a dozen provinces and has destroyed the Dwarfs. Reikland is still confederating the Elector Counts but it feels like a fair fight, Kislev is down to 1-2 settlements, the Norscans have taken Erengrad and Couronne while the vampires have taken Marienburg.

I’m seeing chaos actually wreak some havoc because Reikland only has 2-3 armies and they’re busy fighting the vampires. Chaos isn’t close to ending the world but at least they’re getting some shit done.

This is my experience as well. Sylvania was #1 in power with 30+ settlements. Reikland was strong in power but had less than 10 provinces. The Carsteins had been nearly destroyed but recovered as empire factions lost ground. I played Wurrzag and actually declared on Sylvania just to keep them in check.

When Chaos arrived, they destroyed everything all the way to Middenland. Unfortunately my save file got screwed up and I can’t continue the campaign. Before I lost it I had taken out Kholek at Hell Pit, but Archaon and at least 2 other lords were recovering their armies at Middenland with no one around to finish them off.

I feel like that one way CA could make the Chaos invasion much better is to push back the point at which it starts and make it magnitudes stronger.

Right now, imo, the Chaos Invasion occurs way too early imo and is extremely weak, which has resulted in the current problem of them getting curbstomped by the order factions and any non-aligned/evil factions who felt like helping out. I also find that it tends to happen before I get a chance to fully unite the “core area” of the faction I’m playing, by “core area” I mean something like uniting Ulthuan as the High Elves, or the Empire as the Empire, which results in a mad dash to get that done before turning to face the hoards of chaos.

I personally think that the trigger for the Chaos Invasion should be fully owning the “core area” of your empire, as mentioned above, and defeating your main rival. So Dark Elves would be uniting all of Naggarond and defeating the High Elves, Dwarfs would be uniting the Karaz Ankor and removing the Greenskin menace. Once that is done, the player will have a few turns to prepare before a huge horde of Chaos armies, like 10-15 for each of the Chaos factions, with each being lead by a Chaos LL, comes charging in from:

The area above Kislev where the base one spawns

The area north of Naggarond, rather than just appearing in the middle of the sea

Maybe a seaborne invasion of the area around the Vampire Coast or where Skrolk starts?

The player will then have to make a desperate stand against the nearest horde to them, where losses will be inevitable, due to the sheer size of the hordes and it being the end times. After a while an army with the LL of the Chaos faction spawns, full of elite, gold chevron, units like Chosen and Chaos Knights. Killing the LL will destroy that army and end the Chaos Invasion in that area. At which point you can rebuild and send out armies to assist your allies in the fight against the invasion in their area.

The general idea for this is that the mid game is spent fighting your rival faction, Vampire and Empire, Dwarfs and Greenskins, Lizardmen and Skaven, ect, and then the late game is spent preparing and fighting the end of times with a united empire.

On harder difficulty, the Chaos horde should also be making probing attacks (not full out invasions) to start applying pressure on the player in the mid-game. They can be beaten back, but if the player was already over-committed to other fronts, then that could spell trouble.

I like this idea, and I agree that turn ~100–120 for the whole End Times arc, from random spawns to Archaon, is pretty quick. I would be wary of tying it directly to player actions because as soon as the trigger is devised the invasion can be postponed indefinitely: if it is destroying your rival faction, for example, then just never do that, paint the rest of the world your faction’s color, and then prepare on your own terms. I think it should be tied to some AI actions, a mix of them. Off the cuff, my thoughts would be after X number of confederations, or when only Y number of factions remain, or when Z numbers of armies exist on the map.

Final thought: I want Chaos to effectively scale to the world. Right now it seems like a set number of armies spawn in succession; instead, I would like it if it was always, like, 1.25x the number of armies present across the map. That would ensure that they were capable of the chaos tide across the north.

I play with the 5x chaos invasion mod on legendary which triggers 45 warriors of chaos armies (and then also the warherds/servants/puppets factions) and unfortunately when the ordertide is united, they barely make it past Kislev either. My next playthrough I”m going to try the 10x.