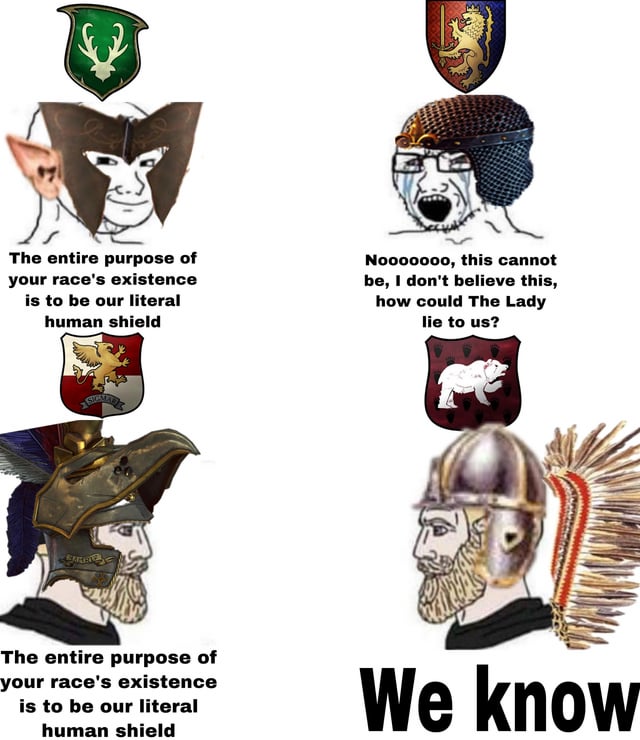 IIRC, wasn’t it more of a replacement for the Elves.

Lileath decided she wasn’t going to bless the elves anymore and started her own thing as the Lady of the Lake.

Which would make the Elves the discards and the Brettonians the new chosen ones, at least for Lileath.

There’s older fluff that implied that the Lady was a Wood Elven scheme of some kind, but that was always undermined by the fact that the Lady’s blessing worked just fine whenever the Bretonnians fought the Wood Elves.

End Times fluff states that the Bretonnians are both Lileath’s chosen and Lileath’s meat shields for her interests whereas the overwhelming majority of elves are a non-concern for her.

Been a while since I read everything firsthand but the knights of Bretonnia were intended to be her Space Marines/Stormcast Eternals, essentially.

They’d be a legion of ultimate unstoppable warriors to protect her new Elven paradise.

It was a retcon as they didn’t want Bretonnia to just be some silly simp kingdom.

Well, that’s all End Times nonsense though. Before that it was a mystery exactly who the Lady was.

If you accept Lileath as the Lady, you kind of have to accept Malekith as the true Phoenix King. :p

Actually, she used Bretonnia as a meatshield so that elves would be spared from the bloodshed, but overtime the goddess grew to like them.

if you make that a numbers game tho, the elves have still tons of other gods (about 10 or so)

but wasn’t there sth like “ze ledy” beeing only an elven demi-goddess? not of the power level of asuryan or khaine therefore. and HE still have lileath in their pantheon, not?

Nah, that was only end of times, which is shit

Actually in previous editions it was very obvious that the lady of the lake was Ariel, with Morgana le gay being a spell weaver. Then they decided to retcon that cause reasons.

I think that’s something that’s inconsistent in the lore. Old lore says one thing, end times says another.

That’s I think specifically the End Times version, but plenty of editions of Warhammer Fantasy had been implying Bretonnia to be dancing to the Wood Elves’ tune in various ways for a while- including either specifically the Fay Enchantress, or just damsels in general having the exact same statblock and capabilities as Wood Elf spellcasters.

I mean…the Bretonnians basically always get their shit done, and since they revering the Lady of the Lake as the highest being, dishonoring her teaching is punishable in the soul of the Knights.

High Elves could just keep on discussing on how to approach a battle, while Bretonnian just throw a Sword and Shield to a peasant, told him to hold, and the Knights goes to the flank and beat the enemy senseless to not lose the Blessing of the Lady.

Lileath decided she wasn’t going to bless the elves anymore and started her own thing as the Lady of the Lake.

I’ve got 14 words for you: And then, the End Times happened and it all went out of the window.

Humans in Warhammer Fantasy are badass. People talk about the Doom Slayer. Yes he is super strong.

I like Bretonnia because the Knights are actually brave.

I like the empire because it adapts to every catastrophy

I like Kislev because it is the wall against chaos

Ah yes, I adapt my helstorm rocket batteries to every situation

Same reason I love the Imperial Guard in 40k. In a galaxy where everything is over the top powerful and world ending, the guard are mostly just normal dudes with equipment chosen primarily by how cheap it is to mass produce.