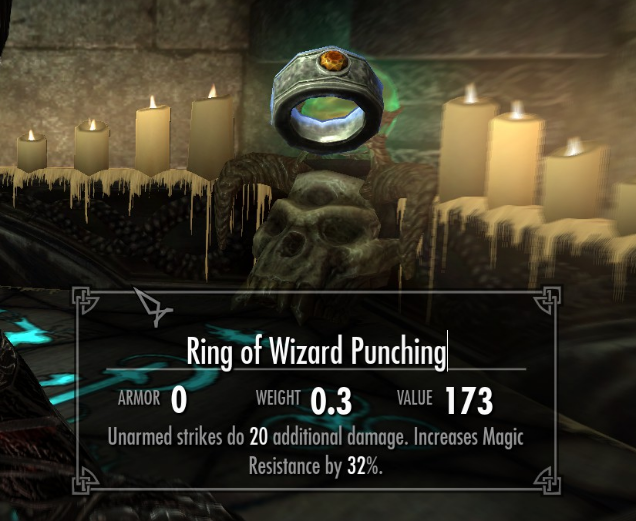 That’s the only type of magic a Nord wouldn’t be afraid to use.

“You’re telling me my fists can break those damned milk-drinker spells?”

Wait… You can disenchant the Gloves of the Pugilist? I always assumed it was a unique enchantment and so never bothered to try and disenchant them.

Yep! it’s extremely useful for unarmed builds, so you can slap it on some heavy gauntlets and actually take advantage of the fists of steel perk. (it also work on rings, for extra fun)

Oh, my friend, you have so much to learn

Nope, always try if you don’t know for sure 😀 this was the only viable enchant of punching before mods came out

Also if you have ordinator, unarmed actually becomes pretty viable and the enchantment helps a ton

Side with the vamps in Dawnguard and you can get the Ring of the Beast, which adds 100 Health and adds an additional +20 to unarmed strike damage.

You disenchant them, resto loop, reinchant something, go and punch a dragon in the face

I was a little dissapointed that there was no skill tree for unarmed combat. Would have been nice to see more wrestling moves.

Me too, because I found those gloves that increase your unarmed damage and was a Khajiit.

I loved unarmed in oblivion, that was my biggest disappointment with Skyrim. By the time they do ES Elsewyre they need to have unarmed figured out.

I have a perk overhaul mod, I think it’s called apocalypse or something, but it adds a whole fuck ton of unarmed perks, making it actually fun and unique to run, as apposed to having to run one style to make a functional character

Edit: its ordinator, apocalypse is the spell mod

The Ring of Nerd Bullying. Nice.

Use it together with the amulet of articulation to tell the guards that you were just horsing around for fun.

This is probably one of the most practical enchantments I’ve seen on this sub if you are doing a brawler character.

“I had another weird dream last night; this time it was the one where I am fighting like a thousand wizards and the only way to kill them is to punch them as hard as I can in the face, and after I finally finished the last of them all, their wizard wives came out and just wanted me to have sex with them… which is kinda weird.” – Rico (Hot Rod)