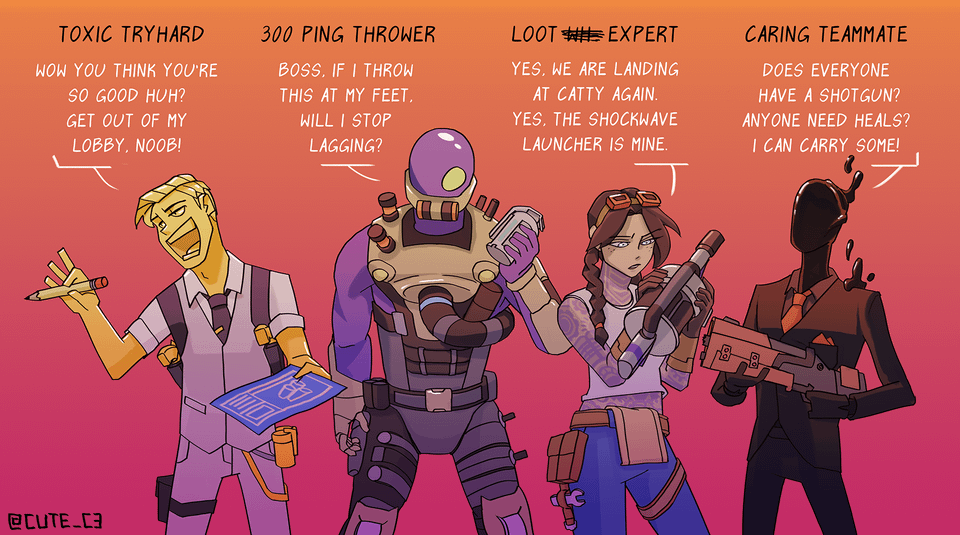 It’s always the guy with midas who’s the try-hard. P.S great job on the artstyle

Midas skin in Season 3 is the college freshman still wearing his letter jacket.

I miss the og killer.

The reaper. He brought true fear to our noob asses.

The sniper. The one sho pushes and dies and complains when his squad wasnt their for them. The noob. The one who carries meds because they arent that good but not bad. (Me)

And when you snipe the guy before he does he’ll be like “stop stealing my kills dudeeeee”.

My squad hs a joke about the guy who’s the worst in the current group is called the “med man”.

“Riot, you’re the med man today.” Nothing gets people more mad than telling someone who’s good at the game that they’re the med man, lmao

I’m a sniper that refuses to build

I play with my dad sometimes. I tend to be the pusher, but only because he says he’s pushing with me. I turn around, and he’s got his sniper out on the hill. I immediately get pounded by two tryhards with shotguns. “I was covering you from a distance!”

I feel the noob thing, I usually keep a tac, a stack of minis, some bandages and maybe a pistol just for good measure.