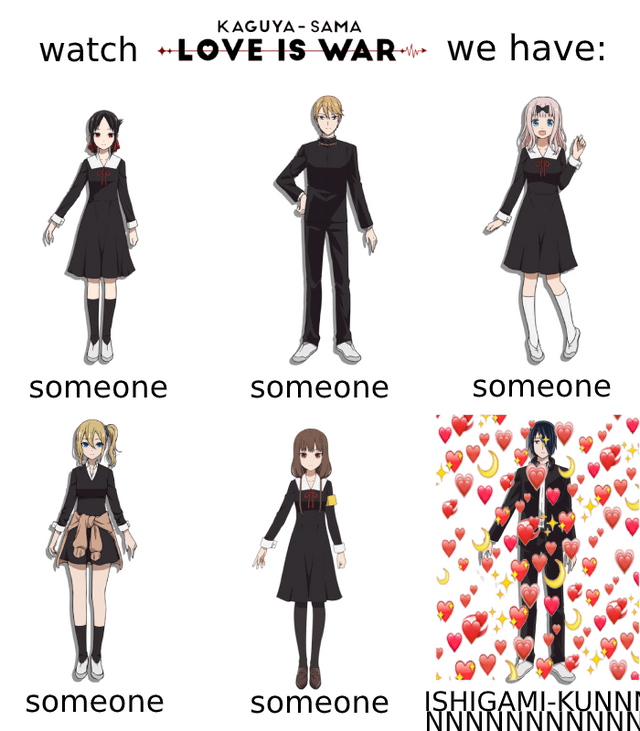 I think the president was very cool in EP11 too

President deserves some love as well

Everyone in the Studco deserves love. The investigation was a result of their collective efforts. Shirogane is the one who happened to have his own scene with Ishigami, but the ppl who worked in the background deserve love too.

You better show some respect to ma boi Miyuki Chadogane you hear?

Yes but how about Ishigami the God or Ishigod for short

Manga prez >> ishigami. Ishigami peaks at this arc. Fight me

Ishigami is the anime version of the average r/animemes user, but with a cool backstory. And he is hot af

I think officially he’s been described as “cute looking”. But that was by Shinomiya.

Though he is being watched by someone who a bit thirsty

I really don’t think average animemes user is kind enough to keep the truth to themselves even after get their reputation spoiled and getting suspended from school just for the sake of protecting a smile. Hell most probably won’t even get involve. Only “I want to die” part is same.

And he actually tries to be a better person

Everyone praising Ishigami, when Shirogane is the real hero smh

I’ll have you know, that I watched EP 11

And only cried 5 times

so can anyone tell me(or pm, incase of spoilers or smth) what happened to make him so popular? i personally wont watch that show so idc about spoilers