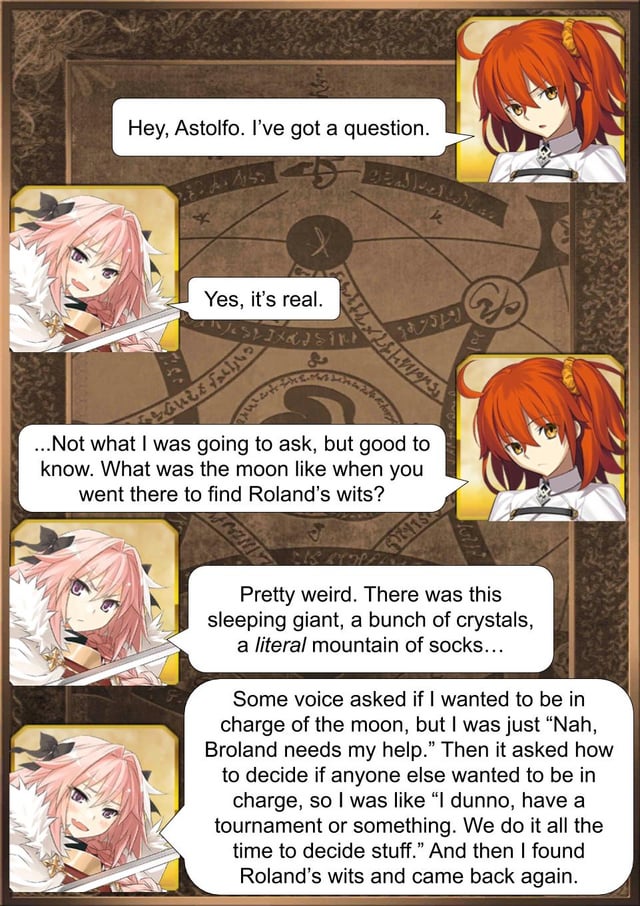 …Astolfo, you went on some crazy adventures as a paladin, huh?

Astolfo went on some crazy adventures as a Paladin, yes. XD

The Paladins were basically the French KOTR on drugs and adrenaline. God knows what some of them were thinking…

And the funny thing is that as crazy as Astolfo going to moon sounds, he was still way saner than Roland, who went on a furioso rampage after finding out his waifu already had someone else (and literally abandoned his king in vain for this), or Bradamante’s moment of yandere rage after hearing rumours that Rogero might’ve hooked up with another girl

Love in general is a powerful force in the world of Orlando Furioso.

Or you could say some bizarre adventure

So would Astolfo accidentally setting off the Moon Cell Holy Grail Wars be a good thing or not?

Considering the friends we got out of all that, I’m willing to call it a good thing.

We got Melt outta it, it’s all good.

And that’s how Fate/Extra happened (maybe).

…….I have no words to describe this.

Dare I ask what the prior question was?

“turns out the moon has this supercomputer with like a hundred gajillion superbytes of ram. still cant run crysis on ultra high though.”

It still struggles to run cryisis on high.

Astolfo: -Stares and says nothing-

I’m going with hair color. That’s the safest option I could think of.

Archer: You think THIS is high concept? Let’s talk about the moon.

Saber: You be quiet about the moon!