WhatsApp users everywhere: Update your app now. A vulnerability in the app has allowed one company to install surveillance software on both iPhones and Android phones by calling users on the app, regardless of whether they answered. Worse, after a call was placed and software installed, the call could also be removed from the log, leaving no evidence that a call ever occurred.

According to WhatsApp, a Facebook-owned app with over 1.5 billion users, it’s not currently known how many users have been targeted.

As reported by the Financial Times, attackers from an Israeli company, NSO Group, are responsible for the breach. The company is known for its “Pegasus” malware—supposedly limited to use by intelligence agencies—and can be used to collect data including location, emails, contacts, browser history, and the ability to turn on any user’s microphone and camera. NSO Group markets this software for its ability to stop crime and terrorism.

WhatsApp learned of the hack earlier this month, and as of Monday, is urging users to update the app as a precaution. “We have briefed a number of human rights organizations to share the information we can, and to work with them to notify civil society,” WhatsApp said in a statement.

This news comes after a UK-based lawyer—involved in a civil case between a number of Mexican journalists and government critics suing NSO Group in Israel—was reportedly targeted by this very software.

Updating is easy; on an iPhone, go to the App Store and tap “Update” next to WhatsApp (or “Update all” if you want to update every app). You should be on version 2.19.51.

If there’s no option to update, you’re likely running the most updated version of WhatsApp.

Crucible will continue to be accessible for players 24/7, but the development team will be scheduling out time to play with the community and solicit feedback. The game will also still be accessible through Steam for current players. Anyone that wants access to the beta should download the game prior to 9 AM PDT tomorrow July 1, after which you will need to sign up through the game’s website for the beta.

There is no set date for when the game will exit beta and release again, with the post saying “it will be based on your feedback and the metrics that we see in-game.” Players will keep all progress and customization items, plus the battle pass and in-game store will remain.

Crucible is Amazon’s first AAA release and a free-to-play team focused third-person hero shooter with MOBA elements in some game modes. GameSpot gave it a 5/10 in our Crucible review, with critic Alessandro Barbosa writing, “Its enticing characters and their occasionally exhilarating abilities are undermined by the unsatisfying third-person shooting underpinning them. The game’s three modes all attempt to stretch the already inflexible mechanics of each character in ways that make each one feel underwhelming, in spite of their more interesting ideas. Most of all, Crucible just doesn’t play host to the coordinated teamwork it demands for balanced matches, forcing you to look elsewhere or gamble with the chance of being matched with players that complement your character choices. It’s a game that fights itself at every turn, and ultimately is little more than a curious distraction from other players in this space rather than a true competitor for your attention.”

GameSpot has officially kicked off Play For All–a celebration of all things gaming. Join us as we bring you the summer’s hottest news, previews, interviews, features, and videos, as well as raise money for COVID-19 relief efforts and Black Lives Matter with the help of our friends from around the gaming world. Check out the Play For All schedule for more. 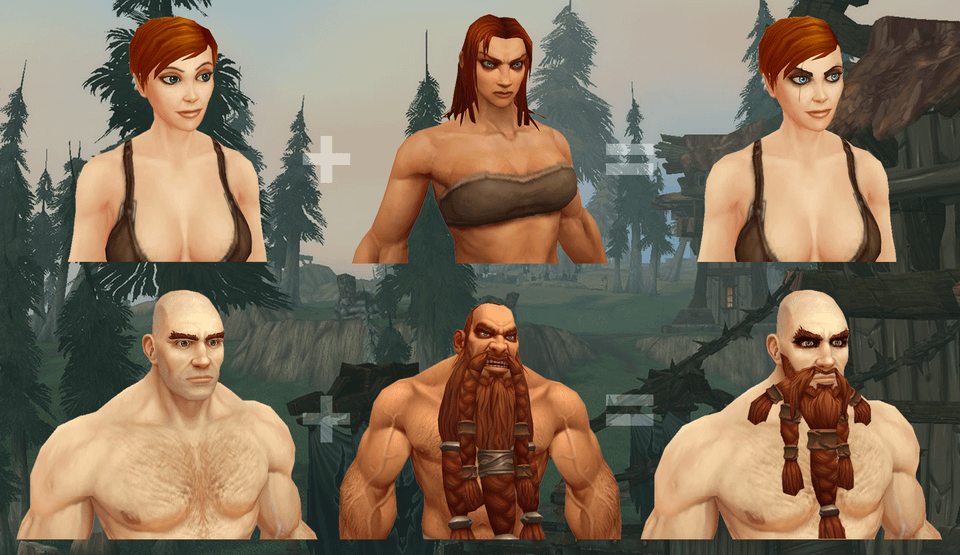 The fact that we didn’t get Vrykul on the Alliance is insane.

Vykruls for Alliance and Ogres for Horde.

Since when? We here at blizzard have been hearing blue humans this entire time!

Community can’t make up their mind.

I just want a bunch of options for allied races.

Namely Hozen. I want to ook them in the dooker.

Would have been sooo much better than Kul Tirans imo.

The only thing I can think of that’s a problem is their height. Tauren are huge already, yet Vrykul dwarf them so bad they’re usually at perfect dick sucking height for most of the Vrykul NPCs.

This so much this. The community has been yapping on about High Elves, Mechgnomes, Demon Hunters, even more edgy kinds of elves and every possible subraces of anything that walks in World of Warcraft but ever since WotlK I just wanted these viking humans as a playable race. Ever since I set foot in Howling Fjord on WotlK release date I wen’t fucking Ariel part-of-their-world on these awesome mofos.

They’re way too fucking big and you know it.

New races need an interaction with current content to make sense, so we would need them to pop up during shadowlands for some reason. Allied races weren’t a thing back in northrend (regrettably) and I don’t see the Vikings sailing south to aid Azeroth out of the kindness of their hearts. It could happen, it’s just unlikely. Maybe we go back to Northrend for a reason during a shadowlands patch?

I’ve been waiting since Wrath… Just make them Kultiran/Tauren height. Half-breeds or something. Almost noone will care if they aren’t 12ft tall. I just want my goddamn playable Vikings. Make em neutral like Pandas for all I care. Metal Vikings for everyone. Please ffs Blizzard. It’s one of if not the most used humanoid asset in the game. It’s basically no work besides a size scale-down.

You can use the vrykul drinking helm and become one basicly

With their height it isn’t happening. Don’t even say ‘scale’ them, because that isn’t how it works. Vrykul have always been absolutely massive in lore and in-game and we can’t get the shrunk to be playable, then they’re just humans.

Vrykul Horde is pretty much the only thing that could ever get me back into the game, much less away from the Alliance. And it makes more sense than Vrykul Alliance, IMO.

We need vrykul, but blizzard will copy TES nords in the end, and everyone will walk around as Mjoll, Serana, Lydia, Frea and so on.

These would be cool.

Though, I do wish that we could have just gotten Kul’Tiran that looked more like the Vrykul.

as someone who made a kul tiran DK female…. im kinda regretting it. luckily theyre only level 60 and have about nothing invested in them, but it looks so weird that a DK would look like… that

Each of the 10 expansions is designed for use alongside the $60 Starter Course, so you need to grab that before considering any of the expansions. While the Starter Course includes Mario himself, each of the themed expansions includes other characters, both friends and foes, such as Yoshi, Toad, Bowser, King Boo, and more. They also come with their own builds based on worlds and fixtures from the video game franchise.

We previously knew about Piranha Plant Power Slide ($30) and Bowser’s Castle Boss Battle, which remains the most expensive expansion at $100. The remaining eight expansions range from $20 to $70.

Additionally, Lego has revealed 10 character packs, which will be sold in blind bags for $5 each. The characters featured in the packs include common enemies such as Blooper, Bullet Bill, Bob-omb, Eep Cheep, Blooper, and more.

There will also be a free Lego Super Mario app that will log coin collection and other metrics while playing and assist you in the building process, providing step-by-step instructions and tips for tweaking your builds. The app will serve as a forum where players can share their progress and ideas with family and friends, too.

You can check out every set in the Lego Super Mario lineup below. Only the Starter Course is available to pre-order at this time, but we will add links to purchase the expansions as they go live.

Former NFL star receiver Vincent Jackson remains a self-proclaimed “military brat” to this day, but that life led to the discipline that’s led to an even more successful career after football.

Have you noticed your milk getting frosty? Meat spoiling quickly? It’s likely your refrigerator is set to the wrong temperature. The FDA recommends keeping your refrigerator at or below 40° F (4° C), and your freezer at 0° F (-18° C) to keep your food fresh longest and prevent foodborne illnesses. Here are some more tips for making sure your perishables don’t perish.

“I never trust an appliance’s self-reporting temperature; I’ve had enough ovens with hot spots to always be wary,” advises a user on the food safety forum at Stack Exchange. “With our fridge, our crisper drawer regularly frosts and partially freezes our veggies, and with a thermometer I was able to determine why: it’s significantly colder down there than the 35° F the rest of the fridge is set on. By at least 5-8 degrees.”

If you’re opening your refrigerator regularly (as opposed to, say, using it for storage only), then keeping it stocked may help keep the temperature consistent. “With an empty fridge, every time you open and close the door you cycle most of the air in it, replacing the cooled air with warmer air, which has then to be cooled again,” say fridge enthusiasts on The Naked Scientists. “With a full fridge, there’s not only less air to be cycled and re-cooled, all the other items that have been cooled stay in the fridge. The presence of many items in the fridge may also reduce the airflow, meaning even less air is exchanged each time the door is opened and then closed.”

“You don’t want to jam pack it so full that there isn’t any airflow around your stuff, because this can hamper the cooling efficiency,” says hobodave on Stack Exchange. Packing the fridge too tightly can also block air vents, which leads to a host of temperature and moisture issues.

Air needs to pass unimpeded between the freezer and refrigerator in order to keep the temperature steady. If you’re seeing frost in your fridge, make sure there isn’t a wayward loaf of bread stuffed up against the air vent, preventing circulation. You should be able to find a guide for your particular refrigerator model online.

“The ideal refrigerator temperature is 35° F (1.6° C). You’re not hugging the danger zone like you would be at 40° F (4.4° C), and you’re distancing yourself sufficiently from 32° F (0° C) that you don’t freeze half the stuff in your refrigerator,” says Stack Exchange’s hobodave. “That said, the temperature within your fridge can vary rather significantly with normal usage. The coldest parts of your refrigerator are the back, and the bottom. The back because the cooling element is there, and the bottom because warm air rises. If items you don’t want frosty are getting frosty, then move them away from the back of the fridge.”

“I would avoid putting items in the door of your fridge that are particularly sensitive to spoilage. The items in the door of your fridge can easily get as high as 59 F (15 C), and do so often,” says hobodave. “Putting milk and eggs in your door will significantly decrease their shelf life. Butter is OK in the little covered section in the door, because the door actually helps keep it’s temperature a little better. You also generally don’t want rock solid frozen butter. So, put your meats on the bottom shelf in the back, your condiments (mayo, ketchup, mustard, etc.) in the door, and put everything else where it fits.”

This story was originally published on 6/21/13 and was updated on 5/14/19 with more detailed information.