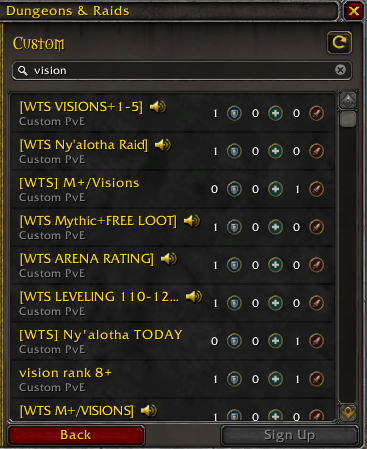 It’s actually prohibited, but they just come back again and again. EDIT: as some fail to see that OP’s rant is about LFG ad for boost, I’ll precise that those specific ads are indeed forbidden, see https://www.wowhead.com/bluetracker?topic=20765567152.

What they really need to do is give sellers their own section in the lfg tool so they arent posting in the other sections.

The selling isnt going away, its a service with high demand. They just need to give it an appropriate place so others arent stuck seeing it.

Just keep reporting them whenever you see them. Blizzard won’t ban them immediately but it creates a paper trail

Can trial accounts post groups on the LFG tool? 99% of the WTS accounts I see are level 1 characters idling in stormwind.

I’m not sure why level 1 accounts are being used, is it trial accounts?

Anyways, it’s very frustrating to see people selling stuff for gold and filling up every category in the LFG tool.

Maybe they can just add a WTS channel or something and toss out some bans if they don’t use that category to fix the issue.

I have reported 30-40 per day for the last 60 days or so. If anything, they’ve gotten worse. Blizz took away the ability to filter the names out, and they don’t seem to be doing anything about banning, so we’re stuck with those assholes.

They could automate it. If 100 different player accounts report an RMT spammer, he gets banned instantly.

They will never ban them, they make many accounts. This has been going on atleast since legion. It is easy to stop it, it would take only seconds. Blizzard is not waiting for a paper trail, they would only stop it, if it ment less accounts not more.

I mean does it though? B/c it feels pretty pointless.

I’m not sure about other people but I have been actively approached while levelling alts by these boosters to advertise in trade for them. Not only have they destroyed trade chat and the LFG finder but I worry about them targeting new players who may not know better and have fledgling accounts banned.

More needs to be done.

Money Corrupts. No matter if its real-life currency or in-game gold. Boosters will just push for more business until something causes a collapse. All the while steamrolling over poor newbies.

At least for trade chat get the addon Badboy. You can filter out key words. After like 5 days of adding phrases or words only these boosters use my trade chat is back.

Although, I will admit, if I could hire someone to level a classic character for me, I would. As it stands, the “safest” way is to make a second account in your name, have a Russian level it, and then merge it with your account. That said, it’ll still probably get you banned unless you can prove you were traveling for work.

Why can’t Blizzard just hire somebody to monitor the list and ban all the obvious RL-cash-for-boost ads in there? Maybe two people per region, to work in shifts.

They are so obvious that it would take no skill or ability to actually judge them at all. If they had to keep creating accounts to post these every two minutes, and they’d go down a minute later, it would quickly stop being worth the effort.

The players really shouldn’t be made responsible for handling this.

They can’t even handle important tickets within 10 days, what makes you think they’d have people for this

They don’t even need to do that – they just need to slap a word filter on channel creation, like they have with the adult word filter. Just ban the words “sell”, “wts”, and all the key words they use. It would be automated – and just have someone review it regularly to update the filter list for shenanigans like ‘w t s”. That they haven’t done that, even that, up to this point is kind of flabbergasting. It’s a day or two of one dev working on it, to get it up and rolling.

The players really shouldn’t be made responsible for handling this.

This is something that has been happening to WoW, and players are somehow used to it now. There’s no proper channel to report people and hope they are removed from the game in the future.

Person griefs your dungeon run on purpose? You can only kick and blacklist, they’ll still run around ruining other people’s runs.

Someone cusses you and wish you die? Mute, they’ll probably be auto-muted too, but they’ll still be there.

People abusing the channels to sell their stuff? You remove them from your view, but they are still there.

Someone ninja’ed your item? We remove Master Loot altogether so ninjas never happen again, together with the tickets.

You get kicked for no reason from LFG-made instanced run? That’s democracy.

Meanwhile in other mmorpgs, you can report people, a GM will contact you. There’s a person monitoring the online community, instead of a bunch of players and automated systems.

You’re on a quest to find treasures from better times in order to bring these relics to their final resting place: The intergalactic museum of time and space.

Equipped with cutting edge hover technology and a grappling hook, you will glide, drift and swing through endless worlds at extreme speeds.

Along with your helpful drone you get to traverse the most fascinating landscapes on earth and outer space, but be sure to bring some weapons as you’re not welcome everywhere.

Of note, the hotfix addresses the Mobile Respawn Beacon that spawned in the now-open bunker near Water Treatment. Currently, Mobile Respawn Beacons are exclusive to the limited-time Armed & Dangerous mode, but they’re set to release into the standard modes when Lost Treasures ends. Some players–myself included–believed the beacon that spawned in the bunker was a hidden secret that teased what was to come, but apparently not! It was a bug.

The hotfix update also addresses notable issues with Wraith and Octane. In Lost Treasures, Wraith got a new legendary skin called The Marble Goddess. Equipping the skin caused a bug that prevented Wraith from taking headshot damage when hit in the head–instead, the game mistakenly assigned the less severe body damage to a headshot. That issue has now been fixed, alongside a bug that allowed Octane to use healing items while using Stim.

WTMG’s Heidi Hawes: “In the end, I have to say that Those Who Remain was a disappointment. I wanted to like it, I really did, especially since the true premise of the game is pretty original. It could lend itself very well to other games in the future. Unfortunately, its fleeting moments of brilliance are lost within the dregs of tired horror tropes, inconsistency with its rules, uninspired gameplay mechanics, and an unfulfilling ending. For many that give Those Who Remain a shot will be largely unsatisfied.”

The Florida Gators are one of four teams that remain the only programs that have at least one player drafted in each NFL Draft in the modern draft era. There have been a lot of players in the NFL that played at Florida. Here is the next guy on the list of my Top 20 Gators based on their NFL careers and our No. 16 pick in the Top 20 is cornerback Janoris Jenkins.

I’ve heard nothing but bad things about this season

I can vouch for that. Loved the first 3 seasons, 4th was rushed, and 5th is just everywhere.

Currently still catching up through season 4. Sad to hear that. Got a friend who’s read the manga and said that it’s pretty good all throughout. They’re mostly adapting the manga pretty faithfully from what I hear. Maybe just didn’t translate as well. 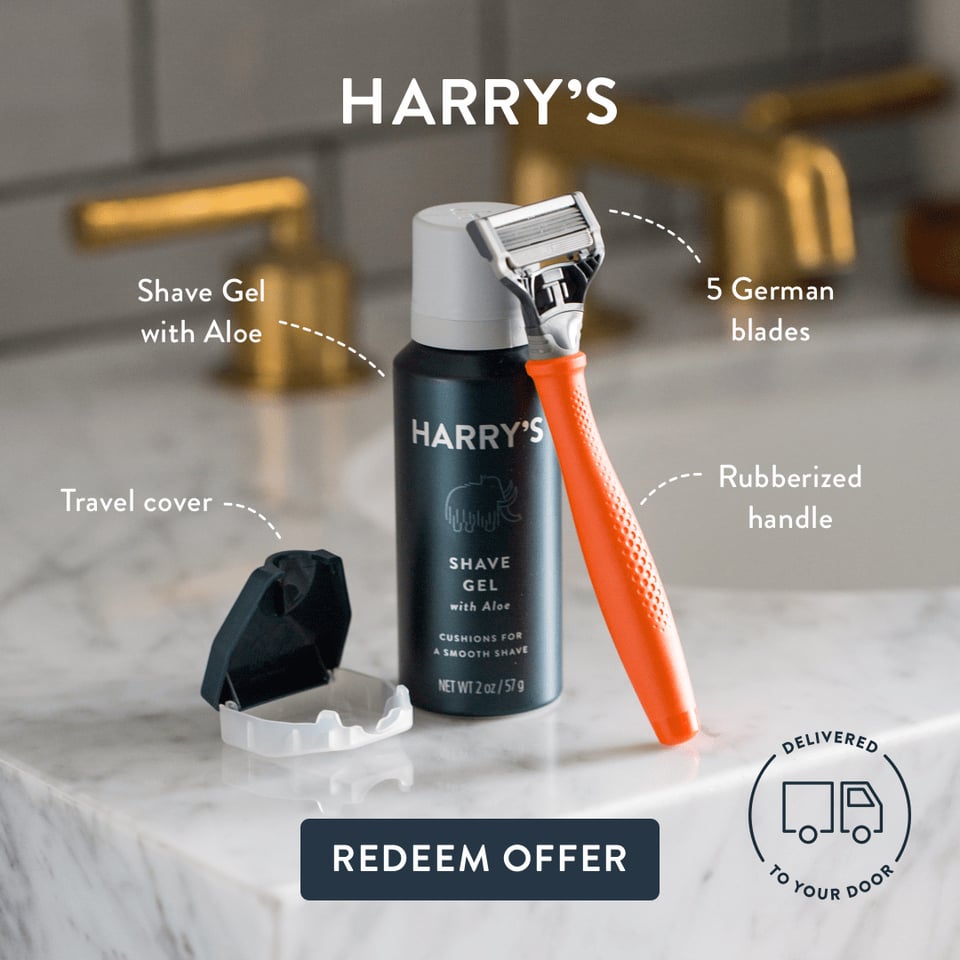 Baby Dino Adventures is a cute platformer game inspired by classic retro games. You play a lost baby T-Rex, and help him find his parents back. You won’t kill anyone. But rather solve puzzles, and make new allies throughout this upcoming adventure.

Baby Dino Adventures is a cute platformer game inspired by classic retro games.
You play a lost baby T-Rex, and help him find his parents back.

You won’t kill anyone.
But rather solve puzzles, and make new allies throughout this lovely adventure. ♥

Walk, run, and jump into a pixelated world full of handcrafted sprites and smooth animations.
All this created frame by frame with love, and passion.

Experience a peaceful atmosphere with cute characters.
No time for hate, violence, or blood.

There are a few TNT and Nitro crates, but don’t pay too much attention to such details.
We believe our young hero is strong enough, don’t you?

If you’ve read this far, it is probably worth mentioning this game is currently in Early Access.
Please refer to the related section above to learn more about its current state.

Thanks!
I love you.

Each week, Entertainment Earth will reveal new Comic-Con collectibles from companies like Funko, Mattel, Bandai, and Loungefly. For now, you can pre-order a set of action figures for both Spider-Man and Starship Troopers. The former is expected to release next month, while the latter is available now.

We’ll update this article with more Comic-Con collectibles and toys as they are revealed.

This $25 Funko two-pack highlights an iconic Spider-Man meme–you know, the one where the two Spider-Men are pointing at each other, both thinking the other is an imposter? If you’re into the meme (and Spider-Man, of course) to get a figure celebrating it, you can pick it up until pre-orders sell out.

Also $25, this figure recreates one of the Arachnid Empire species depicted in Starship Troopers, read to tear through some Terran Federation forces.

Robert Kraft’s Super Bowl 51 ring fetched more than $1 million as the Patriots owner auctioned off one of his prized possessions for charity. Kraft joined the All In Challenge earlier this month — a digital fundraiser helping to feed those in need amid the coronavirus pandemic. Bidding for the ring from New England’s stunning 34-28 comeback victory over the Falcons in 2017 ended Thursday.